Hypothetically both my statement and also yours Sari are incorrect because the words change or changed imply or infer that the team were wearing clothes whilst showering.

Not really. I think you can draw an inference that they did not shower with clothes on. That's not the point of the example anyway. The point was to show how a collective noun affects which form of a verb is used. I believe I picked up this sample from elsewhere online, with the assumption that a reader would understand that the showers were taken in the normal manner. Perhaps you would prefer the following:

After a hot practice, the team shower, dress in their street clothes, and get in their cars to go home.

After a hot practice, the team shower, change into their street clothes, and get in their cars to go home.

The above sentence by Sari infers by its grammatical content that the team changed into their clothes while still wet even with the addition of a comma.

Replacing the word shower with showered quite clearly states an action that has now past.

I agree with Sari.

Not everything needs to be spelled out in detail to be understood; here the already understood details are in the timing.

"After a hot practice, the team shower, change [from the uniforms which they'd previously been wearing] into their street clothes, and get in their cars to go home.

Imagine what it would be like if all details had to be written for someone else to understand a passage. When would the needed details finally end? Suppose in a novel, the weather has been dreary, some bad news has just arrived and Jane suddenly feels the need to write a letter to a friend about her situation and life in general. Does the author need to explain how Jane picked up the pen, or what a pen is and how it works, or what "dreary weather" specifically means in terms of temperature, cloud cover, humidity, wind speed, its effect on human metabolism and thinking, etc?

Talk to me not of prose.

You have audacity I'll give you that, the pair of you.

Consider this opening paragraph from one of the finest English authors that ever lived and I would suggest, in fact I would insist, that not one American author could hold a candle to any of our authors.


Old Marley was as dead as a doornail.

Mind! I don't mean to say that, of my own knowledge, what there is particularly dead about a doornail. I might have been inclined, myself, to regard a coffin-nail as the deadest piece of ironmongery in the trade. But the wisdom of our ancestors is in the simile; and my unhallowed hands shall not disturb it, or the Country's done for. You will therefore permit me to repeat, emphatically, that Marley was as dead as a doornail.

This thread was not started for the purposes of insults. We are not being audacious, we're simply stating that the sentence does make sense as written. I will also state, again, that the only purpose of the example is to show noun/verb agreement when dealing with a collective noun. I see no need to insult us, or Americans in general. I'm really tired of the constant bickering with everything that other people say to you.

It was not an insult but merely a comparison in my opinion.

Please feel free to enjoy this article from Wiki, especially the parody of a military instruction.

Malware "in" your system

Interesting! I've always wondered that myself. I want to say that "in" would be the appropriate preposition "locator" to use.

An Operating System has no "solidity" (for lack of a better word); such as lying something "on" the table.

You can download "on" to your computer but it ends up installed "in" the OS.

Hope I didn't confuse you more. I'm interested to see what Sari has to say.

Because the software system consists of many lines of code and Malware is just code which is inserted into or replaces some of the original code, in this sense it is "in" the system, just as some foolish comment could be inserted into text being read from a teleprompter by a newscaster.

On another level, because a computer is a collection of semiconductors which process electrical signals, I suppose it could be argued that the code (and thus the malware) is "in" the computer. This raises the question of what is the system; the software, the hardware or both?

If one took a different approach and considered the element of time and that the Malware was added later, thus 'onto' the original program, could anyone say it's wrong?

I'd say this question is more about definitions and understanding current technology than about proper rules of grammar.

Because the software system consists of many lines of code and Malware is just code which is inserted into or replaces some of the original code, in this sense it is "in" the system, just as some foolish comment could be inserted into text being read from a teleprompter by a newscaster.

It's a nice and effective idea.How can i protected Sari's grammar thread?

You too can be a member of the grammar police for the low, low price of only $6 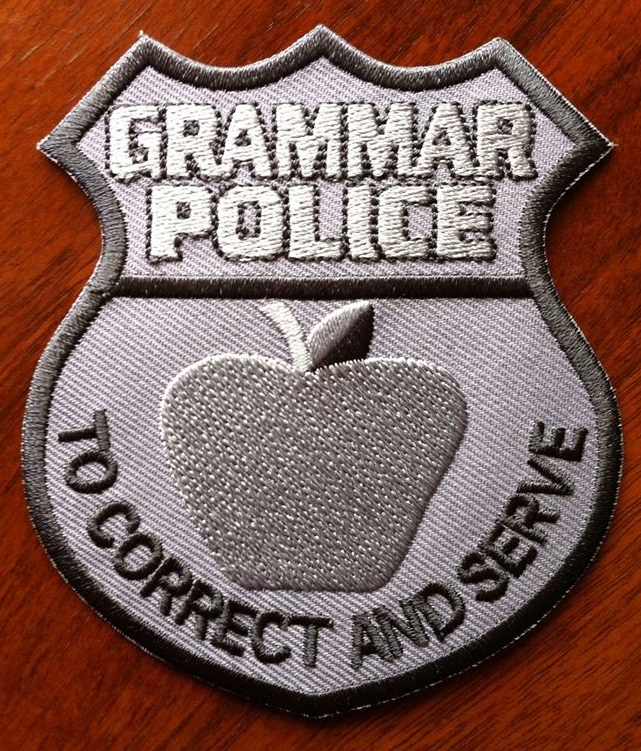 A very interesting thread indeed, at the age of 66 you would think that by now I should be a lot more cognisant of the English grammar, especially being in the UK where this wonderful and rich language originated.

However, of originally poor education, then spending most of my working life in a workplace surrounded by even less educated people, even though I trained as an electrical, then mechanical, hydraulic and pneumatic engineer, a certain amount of grammatical skills have long since been forgotten.

Especially considering I have lived and worked all of my life so far in the county of Lancashire, which has a dialect that takes absolutely no notice of grammar in any form, then perhaps it is no wonder.

However, one thing did catch my notice, a sentence that stated something on the lines of "The team were going home" Actually strikes me as an unfinished sentence that should carry an explanation.

For instance it could have read, "The team were going home, however something went wrong which delayed them."

Just my little two pence, or cents worth.

A very important thread! I am guilty at times of using poor grammar which also includes dyslexic fingers at times...

Breaking up of paragraphs appropriately and such. I'm a lot better when I proof read my writings... Sadly, I don't do enough of that. I know sometimes it's very hard reading some people's posts, especially on social media sites.