Would Like to Record Audio Services From Our Church!

Our Church is a small back in the woods little place and sometimes some of our older members can't get to church because of ailments or other problems and we'd like to record our services so that we can bring around disks for them to play and listen to the service.

So with that being said, I have a few questions which might guide us in the right direction.

1. Can an Audio file be put on a DVD and have it play on a standard DVD Player Like the one plugged in to the TV? (We at some point might do Video services as well, that's why I'm asking about DVD).

2. Do you need information as to what we already have as far as equipment?

3. Am I even in the right section to post this message.


You guys have always been great here at GeekstoGo so I'll just say THANK YOU now!
THANK YOU!

Ahh my area of expertise... Your in the right place! I can have you recording services in no time! 10 years of audio engineering experience backup my stats!

1. Yes an audio file can be placed on a dvd for playback on a standard dvd player. But it would need to be converted [which is complicated]. It would be best for you to render your audio services on cd-r's. They're much cheaper and 99% of dvd players play cd-r's so why not use them? Now if your speaking of filming in the future and adding audio to the film well it would already be there if your filming with a camera correct? Lol. Otherwise if you'd like to add audio to certain parts like a tv show than you'd have to use complicated audio/video software, or something simple like windows xp's movie maker. I guess what I'm trying to say here is that you should just use cd-r's for now as an audio service which will still play on a dvd player. & secondly don't worry about audio on film since you'll already be recording the audio while filming if you plan to put it on dvd.

2. Yes I'd like to know what kind of equipment you already have.

3. You are indeed in the right place to post this thread.

Thanks for the reply. Aside from Mics, cables, etc ... we have the following.

Do we just need to purchase a CD Recorder and plug it into our Amplifier
the same way our CD Player is plugged into it?

You can do that... It actually looks as if the Yamaha EMX 5000-12 Powered Mixer has rca outputs at the top middle section, but I can't tell from the images I've seen through google. If so I believe you can plug in a cd recorder to that output if the cd recorder supports rca input or you could possibly use another output on the mixer for it.

If your on a lower budget just plug in a good cassette recorder deck that is in fair shape using the rca [white and red] outputs of the mixer and record to cassette. Than after you've recorded mass live to cassette, take the cassette home, connect the cassette deck to your pc's soundcard input [not a soundcards pink "mic input" - just soundcard "input" < usually blue/black] with a cable that looks like it has two headphone plugs on each end [see pic below], and record what your playing from the cassette to your pc with a program like ADOBE AUDITION. Than with adobe you can edit the files, take out hiss/distortion, equalize it, fade in/out tracks, and finally save them all as mp3s which you can burn to cd. This is the easiest and best way to do it if your on a low budget because you can create great discs with many cd tracks instead of using a cd recorder which would simply record the mass live to one big long 60 minute track which you would more than likely have to do the same with on pc to make a nice edited bunch of tracks. Because most people don't listen to 60 minute straight audio tracks. If you did listen to a 60 minute cd audio track and needed to shut off the cd player for some reason to come back to it. How would you get back to the part you were on? That would be so much fast forwarding it would put stress on an optical lens laser in a cd deck and kill it after a while.

I highly recommend doing it with a cassette deck because believe me it won't sound horrible in the end. It actually sounds incredibly nice. A lot of people use cassette decks hooked up to pcs like I mentioned in order to pass old cassette music albums to pc, than burn them to discs. Just remember to equalize it through the software when you finally get the cassette audio on your pc.

If the cassette deck does have rca input than you would obviously use this:
Note: Some cassette decks say "cd input" which is the same thing as "input" alone

This is what you would use to hook up your cassette deck's headphone jack to your pc's soundcard input:

Alternatively you can use the same cable from the first picture to connect your cassette deck to your pc's soundcard input!

Quick question, but wouldn't I be able to edit in Audition or a similar program even if we recorded using a CD Recorder?

I know it would seem a bit harder, but I WOULD be able to do that yes?

Yes you can edit the cd recorder disc in Audition after you've passed it to pc. Which is basically the same thing you would do with a cassette deck.

When I need to do a live recording job or need to pass old music cassettes to cds I use this: It's a standard run of the mil cassette stereo by Panasonic. It has two cassette decks, an equalizer, headphone output, and cd line input which is what I use to record. I never lug around the speakers just the main middle part of the stereo and I bring along headphones so I can listen to whats going on that way and make sure that it's recording. Plain and simple! It can be any cassette stereo just like this [worse or better].

By the way remember those cables I showed you earlier? Ya well you can get all of those types of cables and more for dirt cheap at:

The shipping is incredibly cheap there and the prices are bananas! Cables for like $2 compared to Radio Shack or Circuit City's crazy prices. They sell short ones and long ones that normal stores would never carry.

I do the same thing at my church. I found that when the air conditioners and large equipment in our building came on I would get large amount of background electrical noise. If you do as well, you can insert these Ground Loop Isolators to eliminate that electrical interference.

Also, as an alternate to Adobe Audition, you could give Audacity a shot. It's free open-source software that is very powerful. You can do wonderful things to audio with it.

We've been recording our services for ~1.5 yrs now with no problems at all. Perfect audio, no background artifact at all.

Just thought I'd throw my two-cents in since I'm in a similar situation as you.

I do the same thing at my church. I found that when the air conditioners and large equipment in our building came on I would get large amount of background electrical noise. If you do as well, you can insert these Ground Loop Isolators to eliminate that electrical interference. 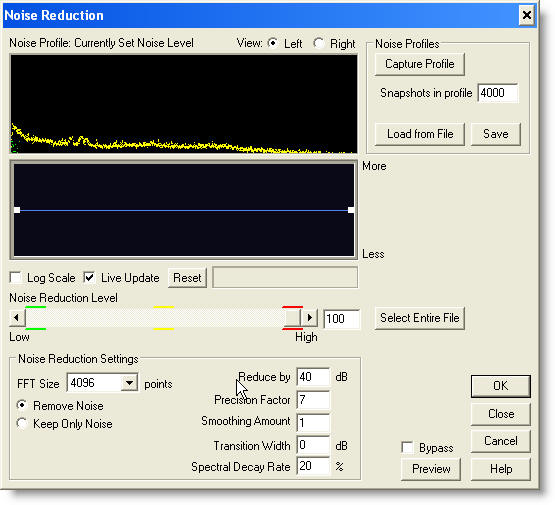 Also, as an alternate to Adobe Audition, you could give Audacity a shot. It's free open-source software that is very powerful. You can do wonderful things to audio with it.

If you can get it get Adobe Audition. It's the the best home studio software hands down. Take it from me... I've only got 10 years of sound engineering experience. I'm not trying to knock your recommendation Jester. You made a good point for a free open source application in case Moondog doesn't have the funds for something like Adobe Audition. By the way Moondog Adobe Audition used to be called Cool Edit Pro which was made by Syntrillium Software Co. But they sold the rights to Adobe about 2-3 years ago. So if you want you can even use an older version of Adobe Audition which would obviously be called Cool Edit/Cool Edit Pro. They're all the same with the exception of the newest Adobe Audition version looking a bit different. So you can probably find Cool Edit Pro [which is the same thing as the new Adobe Audtion] for dirt cheap on ebay or something. I'd say you can probably find it for $20 or less if you search with google. I believe the newer Adobe Audition is $100, well was last time I checked.

I've used Audition as well. I found that I get just as good results with Audacity. (and save some cash as well)

As you probably know superstar, audacity has noise reduction that is excellent. So i wasn't mentioning noise reduction via software because any decent audio program will have it. I mentioned the ground loop isolator merely as a suggestion to eliminate that before it ever gets to the software.

If he likes he can get that and save some moola $$$$

But if you have the money...

My thanks to all who have answered. Your help has been greatly appreciated.

What we have done was bought an Audio Snake to move all of our stuff (minus the two big Yamaha speakers) off the stage and to the rear and are able to hook all of our mics and speakers into the Snake and hook that into our Yamaha EMX5000 Mixer. We bought a CD Player/Recorder (Sony) and have that hooked up as well.

We have tested it and all seems to work just fine. Tomorrow we will try recording our first service. I will add a reply to let you all know how things go.