Speed Test: Windows 7 May Not Be Much Faster Than Vista

Though Windows 7 edged out Vista in our lab tests, you may not notice much of a difference.

Improving performance is one of Microsoft's design goals with Windows 7, and many early reviewers (including ours) have said that the new OS seems peppier than Vista. But tests of the Windows 7 Release Candidate in our PC World Test Center found that while Windows 7 was slightly faster on our WorldBench 6 suite, the differences may be barely noticeable to users.

We loaded the Windows 7 Release Candidate on three systems (two desktops and a laptop) and then ran our WorldBench 6 suite. Afterward we compared the results with the WorldBench 6 numbers from the same three systems running Windows Vista. Each PC was slightly faster when running Windows 7, but in no case was the overall improvement greater than 5 percent, our threshold for when a performance change is noticeable to the average user.

The largest difference was 4 points--102 for Vista versus 106 for Windows 7 on an HP Pavillion a6710t desktop. Our other two test machines showed similarly minor performance improvements: A Maingear M4A79T Deluxe desktop improved by 1 point (from 138 on Vista to 139 on Windows 7), and a Dell Studio XPS 16 laptop improved by 2 points, from 97 on Vista to 99 on Windows 7. 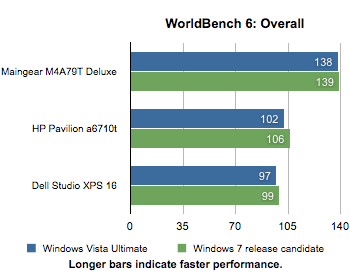 WorldBench 6 consists of a number of tests involving ten common applications, including Microsoft Office, Firefox, and Photoshop. On the individual tests, the benchmark results were generally within a few percentage points of each other. One notable exception, however, was Nero 7 Ultra Edition, where Windows 7 made significant improvements, ranging from a 12 percent speedup to a 26 percent speedup, depending on the PC we used in our tests. Although we have yet to confirm it, PC World Test Center Director Jeff Kuta notes that this difference may be due to updated hard-disk drivers in Windows 7. Any improvements to Windows 7's disk support will be more noticeable in an application like Nero, which uses the hard drive heavily. The test involving WinZip, another hard-drive-dependent task, also showed marked improvement under Windows 7. 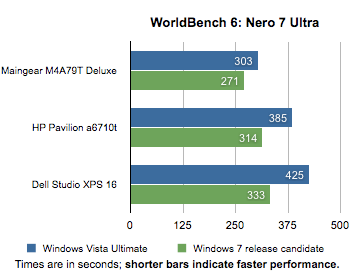 We also measured a noteworthy 7 percent speed increase in our Autodesk 3ds max 8.0 SP3 (DirectX) test on the HP Pavillion desktop, which had an nVidia GeForce 9300GE graphics board. nVidia's drivers appear to be better optimized for Windows 7 than Windows Vista.

Of course, it's important to remember that we performed these tests with the release candidate of Windows 7. Though the operating system's features likely won't change in the final version, Microsofts engineers may still find ways to tweak the code to improve performance.

If these test results remain consistent with those for the final version of Windows 7, the news will likely be disappointing to many Windows users. One of the major complaints about Windows Vista was the fact that it was consistently slower than Windows XP. If Windows 7 doesnt significantly improve that situation, it may fail to convince people to move away from Windows XP.

That said, there may be other areas we didn't cover in our testing--such as startup times--where Windows 7 may outperform Windows Vista by a wider margin. The best way for you to get a feel for Windows 7's performance is to download the release candidate and take it for a test drive on your system.

We used three PCs in our testing: a Maingear M4A79T Deluxe desktop, an HP Pavillion a6710t desktop, and a Dell Studio XPS 16 laptop. The powerful Maingear comes equipped with a 3.2GHz AMD Phenom II X4 955 Black Edition CPU overclocked to 3.71GHz, 4GB of memory, and dual ATI Radeon HD 4890 graphics processors. The Pavilion, a mainstream desktop, features a 2.6GHz dual-core Pentium E5300 with 3GB of memory and an nVidia GeForce 930GE graphics chip. Lastly, the Dell Studio XPS 16 laptop packs a 2.4GHz Intel Core 2 Duo processor, 4GB of memory, and an ATI Mobility Radeon HD 3670 graphics card. On all three systems, we ran our WorldBench 6 benchmark suite on a clean installation of the 32-bit edition of Windows Vista Ultimate with SP1 and repeated the process with the Windows 7 Ultimate release candidate (again, the 32-bit version). We made both operating systems current with Windows Update, and we installed the most current hardware drivers available.

Might as well have gone with NT 7 as a new kernel instead of using the same one as Vista.

I said that. I was saying that NT 7 should have been created for Windows 7, instead of sticking with NT 6 (and making mod versions of it).

I already knew Vista was 6.0 and 7 was 6.1. All wrapped in a similar kernel. They might as well call Windows 7 a kernel upgrade or a refreshment.

So if they changed the name of NT6.1 to NT7, would that appease you? It's the same logic that NVIDIA used when they renamed the 8800GTS to the 9800GTX (it sure sounds a whole lot better, but it is basically the same thing). At least Microsoft is honest about it. Windows 7 (and the kernel it's built upon) was never meant to be very different from Vista. They tweaked a few things, gave it a fresh coat of paint, and that's it. It would be a huge mistake if they had gone around making a new kernel for Windows 7, as that would lead to the same incompatibilities that plagued Vista at its release.

A lot of other sites are saying that Win 7 is does not do well on bench-marks but real-world performance tests are showing drastic improvements in a lot of ways. In general it performs on par with XP, and often faster, I'll need to find the links for proof. It should be noted though, as time has progressed the performance gap between Vista and XP has really shrunk (and in some places disappeared or reversed). This could be why it benches closer to Vista, as Vista has improved quite a bit.

It would be a huge mistake if they had gone around making a new kernel for Windows 7, as that would lead to the same incompatibilities that plagued Vista at its release.

I totally agree, MS could not afford that to happen again, but MS is losing the battle in some ways by not creating something completely different. I say this with OS X Leapord in mind. If you watch a demo of Vista/7 and a demo of OS X, to the average user(which is most of their market) OS X blows Vista/7 out of the water, and I hate to admit that. Forget the benchmarks, all the small tiny things the average user doesn't even understand. I mean the UI and features are just outstanding when compared to Vista/7. Time Machine, Widgets come out of no where from behind you, Minimizing (i.e. Genie affect), the Taskbar(i.e. Dock), Spaces, etc. It is just seems plain awesome to be in front of that computer screen and makes me want to interact with OS X.

Here is a video that covers Why Leapord is better than Vista.

It probably opens a whole other can of wax (business, marketing, overall costs, etc) but I think many users are waiting for the big Giant MICROSOFT to wow us again like they did with the original Windows. Maybe that is impossible or far fetched, but when I saw OS X for the first time, that sense of "WOW" I got is what I really would like to see out of, ummm Windows 8?

I can find every program that would do the same things, if not similar to Mac OSX (Leopard).

Time Machine: ridiculous graphic effects...who needs that? Windows Vista has volume shadow copies. For the incremental backups, I would go with SyncBackSE.

Users can also use WindowBlinds to place a skin on Windows that looks like Mac. Or use one from Patrickgs.

For the Mac object bar, I would use Object bar.

I can find every program that would do the same things, if not similar to Mac OSX (Leopard).

Yeah I know, but not without having your memory usage go through the roof. That was sort of my point, it's all there wrapped in a nice little package directly from the OS maker, not a 3rd party having to figure out how they can improve the OS and then you go there to get it. See what I'm saying? I'm trying to stick with windows, but as stettybet0 pointed out, I'm getting tired of

It's the same logic that NVIDIA used when they renamed the 8800GTS to the 9800GTX (it sure sounds a whole lot better, but it is basically the same thing)

They tweaked a few things, gave it a fresh coat of paint, and that's it.

Maybe I can only speak for myself, but I'm just ready for something different, completely. They have done some things that I like, here is a lengthy series about Windows 7 presented by Microsoft.

Edit: DragonMaster Jay, thanks for those links by the way. For my new build that will work out great, but I'm just trying to keep the average user in mind that may only have a gig of memory, ya know?

I just do not see the point in paying for a seriously overpriced MacBook or any other branded products by Apple.

For the RAM issue, add some more RAM for cheap -- and get a good boost.

I just do not see the point in paying for a seriously overpriced MacBook or any other branded products by Apple.

Great Point! I keep talking about the average user, but Mac's are bit on the pricey side, that's for sure. There are ways around all that, but I believe that would be in violation of our TOU to talk about it.

Not that I would necessarily do that, but some would, or do actually.

I think you mean virtual machine...right?

I think you mean virtual machine...right?

Removed, we don't even point people in that direction

Windows Vista could do much better than it did, but Aero is in the way. The NT 6 kernel including the Aero interface is what made everyone run so slow.

I transformed Vista back to Vista Standard, then applied a Think Green third party theme. Works ten times faster, even with 4 GB RAM and Dual-Core Intel and 324 MB video card.