So I'm running Windows 8.1 on a Toshiba satellite L855. My dad kindly upgraded me to 8.1 (without my permission) while he was looking for an issue I had with my wireless access. I haven't used this computer before to play much media, but when I recently tried, surround sound options are not available in realtek audio. The only option available is Stereo. (FYI I just tried to post the screenshot of the settings but this form wouldn't let me). When I had Windows 8, I had other options. There is nothing in the drop down list other than stereo. I recently updated the driver, to no avail. Please advise.

Laptop only has 2 built in speakers, usually will not give you true surround sound possibly only a virtual surround sound, could well be reason why it only shows Stereo, plus audio source,(e.g. music or non surround)  being used is another reason. Any speaker jacks on this model be orange,black and green? When you listed this Model there should be more numbers after L855, with Toshiba's site few models with L855.

I have a stereo system hooked up to the laptop, it is not outputting surround sound. Model doesn't really matter in this diagnostic, as the option to output anything other than stereo isn't there.

I'm using the headphone jack to put sound out. I used to have options in the Realtek preferences, and I no longer do.That is what I am trying to remedy. (no colored outputs on this model).

I have a stereo system hooked up to the laptop, it is not outputting surround sound. Model doesn't really matter in this diagnostic, as the option to output anything other than stereo isn't there.

How do you have your stereo hooked up ?

Yes there are differences in Model as shows on Toshiba i can not just put in L855 on support site, you try http://support.toshiba.com/

Comes up with all these

So i can't realy see your specs. Have to take one model and assume the rest.

What is shown up top is what i saw on one model.

I'm using the headphone jack to put sound out. I used to have options in the Realtek preferences, and I no longer do.That is what I am trying to remedy. (no colored outputs on this model).

Headphone jack is Stereo only, we know this. Is this going to your Stereo system ? Said you use to have it working ? When was last time it did ? At first you said,

I haven't used this computer before to play much media, but when I recently tried, surround sound options are not available in realtek audio.

Now HDMI Output can send Video and Audio to another device, a TV and a  A/V Receiver.

Selection might not be there unless a surround sound  5.1 signal is detected, like Dolby or DTS, then has to be decoded. Check through the settings in Realtek's Audio Manager, something could be set wrong or it is the hookup.

Still little confused on how it worked before and how you were using it then, Stereo system or just with Laptop speakers, because there are only stereo speakers.Not saying there is not a virtual surround can be used.

Are you stating that the use of an HDMI cable is necessary for the surround sound option?

It would really help us if you could give us the full model number of your laptop, Gostchyld.
You can easily find it by removing your battery and looking under it. The model string should match the type of the ones jds63 listed above.

0or are you looking for more info?

There's way too many Sound Drivers listed on the webpage for your laptop's drivers.
Alright then. Can you go in your Device Manager, and under "Sound", tell me the name of the Devices that are listed ? You can add a screenshot if you want.

This is what i see from specs of this laptop, Ports- Video - RGB - HDMI and Audio - Microphone input port, Headphone output port.

I would advise you as Aura said go into the Device Manager, on keyboard hold Window key + X , select Device Manager. Under Sound, Video and Game Controllers should list this   SRS Premium Sound HD (Realtek) .Should be there if you are getting the Realtek settings in control panel, something might be corrupt.

As stated before it is a sort of Virtual surround through 2 speakers,SRS, look here at what you should see in your control panel  and explanation on this type of sound     http://forums.toshib...-HD/ta-p/352850

I would try to uninstall the driver and reinstall it again. This is the correct driver software according to your model in the spec sheet i saw on Toshiba support site for Toshiba Satellite L855-S5112

Can be found here, if need to re-input the model number and select the above Driver software, download it here    http://support.toshi...reeText=3574883

Unless you find something else within the software in control panel, also un hook anything have hooked to output port on Laptop to try it again. I would try reinstalling.

Then reinstall the driver software you downloaded.

Are you stating that the use of an HDMI cable is necessary for the surround sound option?

No i believe this can only be used to hook to a TV or another display device for Video.

For some reason, I'm unable to post screen shots, or any pic (used the snipping tool to no avail, very frustrating). Under sound, video and game controllers there are the following two options:
Intel ® Display Audio
Realtek High Definition Audio

Therefore, from this webpage :

You are looking for the 3rd driver under "Sound", the Realtek Audio Driver one : 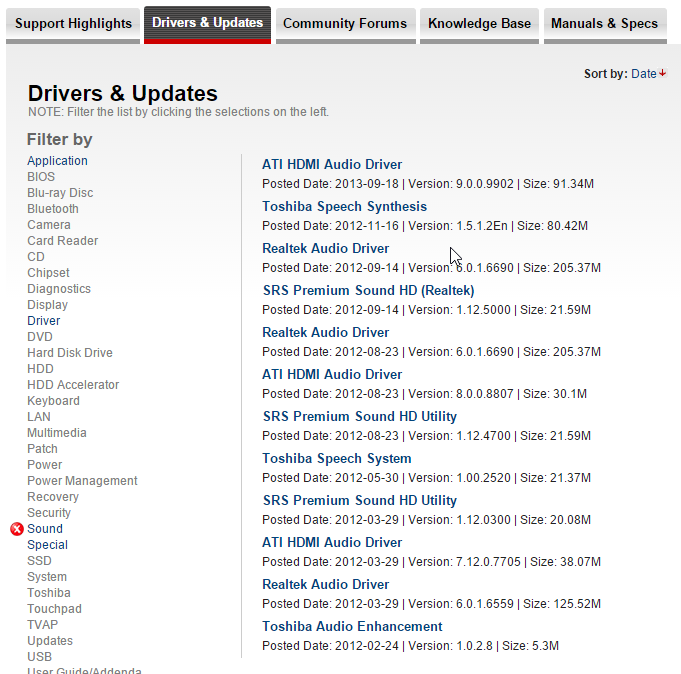 Do you have any "Unknown Device" listed in the Device Manager ?