Many thanks in advance

Let me make sure I understand what you want. If there is a value greater than 0 in column D row 3, then the cells of columns A and B row 3 should got highlighted. And so the same check for every row.

If so there is no 'macro' needed. You just gotta make Conditional Formating for columns A and B, to highlight with the formula =D1>0

No sorry. I have data in columns A & B (Customer Name & Account Name) some of the names match and I have done a Countif in column D which confirms the matches where applicable so I want to highlight the matches in both columns.

Hope this is clearer.

I still don't understand. Maybe a screenshot of a sheet like yours, and the formula you used in column D, would help.

Apologies I cant get a screengrab as im on a restricted network drive. I'll try and type it out and hope its clearer LOL

So based on the above cell D2 the countif formula would show 1 as tony appears in both column B and Column A. So I want to be to run a macro where there is a value greater than 0 in Column D and highlight the relevent matches in columns B & A

Still no macro needed, do it via conditional formatting, set two rules:

This should be good for your case, resulting in a highlighting like this: 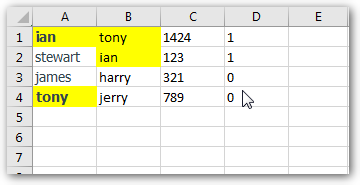