Hey there, team; here's a Speccy dump of my system for you.

So last night I was just scrolling away on Facebook when all of a sudden my computer made the "hardware unplugged" sound. My screen went black for a moment and when it came back the display wasn't at full resolution:

I tried adjusting the resolution within Windows but I no longer have an option for 1920x1080, even though that's what it was always on before:

I verified I had the most recent drivers for my display adapter via the Device Manager; ATI doesn't have an official driver listed for this GPU for Windows 10 on its site but I've never had any issues before tonight. I reseated the DVI cable on both ends as well as the GPU itself in the tower. Most recently, I did the Windows 10 Reset, which actually worked for about 10 minutes before the same thing happened (hardware unplugged sound, momentary black screen, [bleep] resolution); all I was doing at the time was re-downloading Chrome and getting it reconfigured.. That's where I'm at now and it really sucks. Any advice? Any thoughts on what may have failed/busted?

Edit: Also, apparently I can no longer put my system to sleep? This is weird, guys.

This just quickly while we take a look at the rest of Speccy;

** Latest drivers listed at Gigabyte are for Windows 7 and no 10.

This has been resolved; I rolled back the display driver.

Couple of suggestions for you if not done already, create a new system restore point using the now stable settings and stop Windows 10 from auto installing driver updates, as you have found Windows installs drivers that can cause folk problems, see guide for this here

Hi there, again. This is again unresolved as "Feature update to Windows 10, version 1709" ran today and broke my resolution again. Making things worse now are:

- Even though I created a restore point (as suggested), the feature is now disabled (it wasn't before) 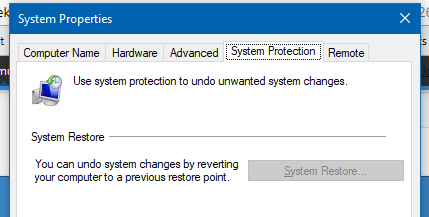 Any additional thoughts on this?

Here's a new Speccy link in case it might be useful.

Getting late here and will be going offline soon so hopefully the above will get you sorted.

Getting "components are already installed" message when I run that tool.

I should note also that I've again lost the ability to put my system to sleep.

Not seeing anything in Speccy related to AMD software other than for the HD audio.

Have you installed the latest drivers for the MB ** starting with the chipset and tried fully updating Windows.

Can you answer the above for us.

I should note also that I've again lost the ability to put my system to sleep.

If you mean Hibernation then no bad thing as it is a problematic feature that can cause folk no end of trouble and especially with Windows 10, disable it.

Open the Win+X menu, and click/tap on Command Prompt (Admin)

In the elevated command prompt, powercfg -h off press Enter and you are done.
While you are at it, change the Windows power plan from High Performance to Balanced, HP is a form of OCing that causes instability and generates more heat.

Hello, again; I didn't mean Hibernation, I meant Sleep. In any case, in the gap between my last comment and yours I got impatient (which is me, not you; I understand you have a life

) and chatted in to Microsoft where they helped me install an earlier driver version which fixed the problem.

Have a good day!

in the gap between my last comment and yours I got impatient (which is me, not you; I understand you have a life  )

Nope, it is called timezone difference, I am in the UK and yourself in Canada + I have this terrible thing called a business to run

and chatted in to Microsoft where they helped me install an earlier driver version which fixed the problem.

A problem that was caused by one of their updates, you may recall the following from my reply #8;

Not seeing anything in Speccy related to AMD software other than for the HD audio.

What has been happening to folk with the latest round of updates is their correct drivers for the video device have been getting uninstalled by Windows and replaced with Microsofts own generic video drivers, this has caused no end of trouble for people like yourself so please don`t feel grateful to Microsoft

Have a good day!

You too, whatever the time there in Canada