I registered here specifically because someone had a similar issue, only theirs was the CPU overheating, mine's definitely not that.

I've been keeping an eye on voltages and temps but this seems to randomly happen. There will be a loud click, then my computer will completely power down. Sometimes it'll power itself back on, other times it won't. Now this click isn't from any HDD and I haven't yet narrowed it down but strongly suspect it's the PSU clicking, possibly as if reacting to a short circuit?

It's also started not cold booting in the mornings, e.g not POSTing, no system beeps... nothing other than the fans wirring away. If I leave it there for 30secs or so it'll then boot if I power down and immediately power back on.

Sounds PSUy to me. What do you guys think? It's a 700w "gaming" PSU so power wise it should be sound, but a few years old now so might be iffy.


Let me know if this screams out to anyone and they know for almost certain what it is, otherwise I'll give more HW details etc. 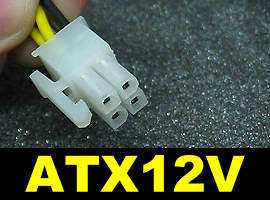 The 4 pin ATX12V was apparently loose, despite being clicked in place it'd be able to move just enough to cause problems. I stripped the comp down and had it running laid out on a surface then by fluke, knocked the PSU and heard the click and power off. It seems heat build up over heavy use made the cable/connector flex in such a way that it'd short, be detected by the PSU which would then click off for safety.

It's amazing what trouble and strange symptoms one loose cable can cause...

I'm sat here with CPUID Hw Monitor snapped to one side of my screen while I surf solutions on the other half, and out of the corner of my eye I see "TMPIN2" pop up at a whopping 107'C!

Google says that's the nb and that it shouldn't be higher than 40 on my mobo. The temperature isn't updating like the other readings so it seems to be a one off but seeing it pop up at that makes me wonder if that could be triggering a shutdown?

I'm ranting I know, but fingers crossed something gives the problem away.

I'm going to say it's the PSU. I'm 90% sure the clicking is coming from there after recording clicks with a mic near the mobo and the PSU, the PSU click being much louder.

I think it's some kind of saftey short switch fuse thing. It seems to be tripping. I don't want it to. Any ideas what could be doing it, how to stop it etc?

Only just read your topic

As for the loose ATX connector....I have had similar connectors do the same thing. It is more that the female sockets get spread and the male pins to not make a good connection. It happens when the cables are flexed side to side or removed and inserted a lot of times. I have been successful with "rebending" the female socket by use of a proper size pin extractor or a scribe down in the socket. You need to be careful with the scribe that you don't bend the socket out of shape. The best thing is new sockets on the connector, but that is not always possible.