Thanks. I changed the notification setting and I am going to follow up your suggestions with someone who helped me before.

Let us know how it goes and any questions please ask.

Can I ask what PSU you have ordered.

Regarding the notifications problem, best that you contact a Mod or Admin as they have senior forum permissions whereas I do not.

How are things going robirdman, have you fitted the new PSU yet.

Finally took over a month to get my inlaw to install the new CPU and later found one drive not showing up.  Called and he said to check for any unconnected cables.  Found one and connected and drive came back with new letter.  Changed back. Haven't used computer enough yet to determine if trouble free.

I had noticed in my music program that I was still having some songs that should only taking a second to open taking about 30".

But today definitely things are not back to normal.  I had finished my 3rd weeding of Rough-legged Hawk (RLH) images, and was ready to proceed to the next step of renumbering according to my system, before reorganizing, making tiffs, etc.

Meanwhile, I had since also gotten good new shots of Long-eared, and Saw-whet Owls, also ready for renumbering.  I did a mass renaming of older Rough-legs to conform to the new system I use now, and when I went back to Photoshop Bridge, the renaming didn't show, and I had spinning circle.   I went to the other open Bridge Window to renumber the owls, likewise, but the Window wouldn't come up.  Neither Bridge window would, so after way too long of this, I went to task manager to end the open window.  But it kept reappearing, so I finally closed Bridge.  Then I reopened the new digital folders and finished renumbering the owls.  I went to the RLH window and the computer spontaneously rebooted.

After getting back to the RLH window and trying to finish the renaming, I got a spinning circle and building criteria.  This normally takes a couple of seconds and it has been going on for 25 minutes, basically stuck again.

So new power supply hasn't solved these problems. What could be wrong?

Then I took the drive off and did the renaming on my laptop and it was done in 2 seconds.  Put back on the Nimbus, and all the renamed ones show 0 bytes in Photoshop Bridge, but megabytes in Windows Explorer.

After getting an offer to scan and fix errors on the drive, I let it, and reopened Bridge and the renamed images had reverted to the former name.  I then was able to rename them as desired finally, quickly.

Well I never stopped having problems and every time I tried to export (compile from clips) a 6 minute video in Premiere Pro, the computer would reboot before the end.  I was going on a long trip and took the PC to my nephew-in-law to assess and do whatever seemed needed to bring it up to speed.  He determined that I needed a newer video card and ordered a good one for abut $200.  I came back from my trip recently and tried to export the video and it reboots closer to the beginning than before.

I connected the HD to my 1 core ASUS laptop and finally was able to export it.

So the processor had new paste applied. He said that it wasn't even well seated before.  A more powerful power supply added, and better, newer video card, and still can't finish a video project of more than a minute or 2.  I used to be able to do over 15 minutes without a problem.  The performance meter shows 100% while exporting, while memory is only about 1/3 of capacity.

What can be tested now?

When you say your computer shuts off, you mean like as if someone just pull the plug on it?  If so, that's definitely characteristic of CPU overheating.  However, I have heard that a CPU will overheat if it doesn't get enough power (not sure this is true, just something I heard).

- It might be helpful to post the make and model of your PC so people can help you better.  If you bought it custom-built, then post the exact model of your motherboard, exact model of your CPU and possibly even the exact make and specs of you RAM sticks.  All (or most) of these specs can be found using a program like Speccy (from Piriform).  In fact, even if it is a factory-built PC (like , HP, Dell, Acer, Lenovo, etc), I would still post all that info from Speccy.

Anyway, here are some things to consider...

- Your CPU should have it's own 4-pin power connector which supplies additional power to the CPU.  It looks like this 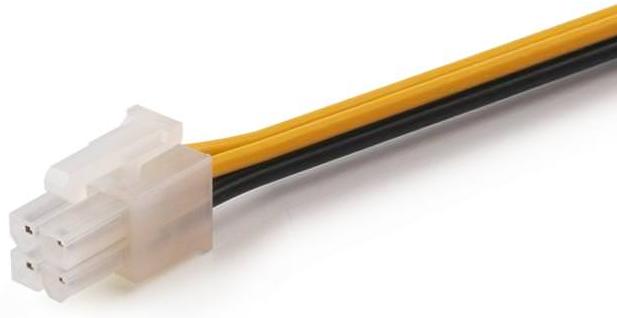 If there is no power connector near your CPU, but you find it's dangling from the rest of your wires coming out of your PSU, then you need to connect it to the proper connection on your motherboard near your CPU.  Note:  The color of the wires as well as the plastic connector might be a different color than shown in the pic, but it should be the same otherwise.

- Do you have a fan on your heatsink?  If so, is it running while the PC is on?  If not, it should be!  If it's not, then the fan is either not plugged into the motherboard or it is defective (or, worst case scenario, you have a bad motherboard).

- Someone in another thread suggested you get a better heatsink for your CPU.   I would definitely try that if I were you. You will have to apply new thermal paste when you change the heatsink, so I would try another brand of thermal paste.  While you're in there, reseat the CPU again.  If you do get a better heatsink and the problem gets noticeably better, but not 100% fixed, then it may be safe to assume it is definitely a cooling problem.  In that case, you may want to look into other methods of cooling, like liquid, as opposed to heatsinks and fans.  Other methods might be a little noisier, but if ya need it, ya need it.

- Also, you mentioned (on this or another thread) that you get the "wheel" or spinning cursor.  That is usually due to not enough RAM or even junky/damaged ram.  Just something to think about.  RAM problems should not cause a hard shutdown, though (you would more than likely get a BSOD instead), so I would not go changing out RAM right now.  Just something to think about. However, it might be a good idea to remove all the RAM sticks and reinstall them. If the PC manufacturer didn't seat the CPU properly, then expect that to be the case for the RAM as well.  In fact, reseat any expansion cards, too.

- If any of this is "not your cup of tea", just look up some Youtube videos on how to do this stuff instead of waiting around for you inlaw to do it.  It's really is pretty easy stuff to do.  Nowhere near as hard as working on a car or installing drywall lol.

- Lastly, keep in mind that your problem might be due to a defective motherboard.  If this is the case, there's not much you can do but get a new Motherboard.  There's no easy way to diagnose this.  The good news is, motherboards in Windows desktops all use standard form factors so you don't have to buy the same exact  motherboard.  It just has to be the same form factor which, in your case, will be either ATX or MicroATX.  To know which size you have:  if the motherboard is rectangular (12 in. × 9.6 in), it's ATX - if it's square (9.6 in. × 9.6 in.) then it's MicroATX.