Crash during virus scan in safe mode (windows 8.1) I think I have a ro

I've never posted before so bare with me.

In chrome the following things happen

1. On startup it doesn't do what I've told the settings to do
(I said open latest tabs, but it shows me a blank page, but history still shows those tabs available.
2. When I try watching netflix, it says my components are not updated, I click go to components and see that all the components have the "no updates found" and then I click "check for updates" and the /thing/ switches to "component not updated" normally it would update then.
3. When trying to switch tabs it takes a few seconds to recognize my click, the pages run at normal speed individually.
4. When trying to search in the address bar it takes up to a minute to register I clicked, and when I type it takes a minute to load(but I can type while it's frozen) This is the same for the search bar in "new tab"

5. I have many (4) adblocks, but I've had those for a while and never had problems

6. When I click (sometimes) it opens a new page to malicious software, (flash is needed to be updated)

So I decided to run some antifirus programs,
I downloaded panda (free), and it showd 30 errors(I fixed them)
I downloaded bitdefender
disk defrag

and before then
I had kaspersky
avast
and avg

I decided to run antivirus in safemode and restarted the computer pressed 'f8' and 'fn + f8' but nothing happened
I went into pc settings and tried it that way but my computer just crashed to the blue screen of death
I tried it again and it finally went into windows 8 mode, I got a screenshot of the programs running then and strated panda again,
I wanted to see if my game would run better in windows 8 mode but it lagged more than ever (running at 90%+CPU) I shut that down and went back to panda, canceling the current scan and trying the shorter one, It detected nothing.. So I ran it in the advanced one again and then my computer crashed went to the blue screen of death: 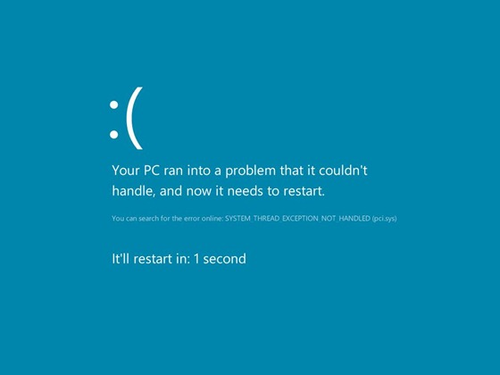 It restarts but not in windows 8 mode, I decided to post online,(now)

What is on my computer? Is there something on it?
how can I get it off without installing more viruses
I'd prefer to have non-interruptive antivirus programs that I can turn off any time (the reason I uninstall most antivirus programs)

Hi there, do you still need assistance ?


Also tagged with one or more of these keywords: rootkit, antivirus, safe mode crash, Infected