Yes, we all tend to make plenty of typos and errors in grammar, yet often I catch errors by professionals - journalists and other writers who should be word-perfect.

Key word being "should"

I made my way over to FreeRice today, for the first time in a while, and noticed that they now have English grammar quizzes. Actually, they have quite a few different subjects, now. It made me think of this thread.
Learn.. for a good cause! 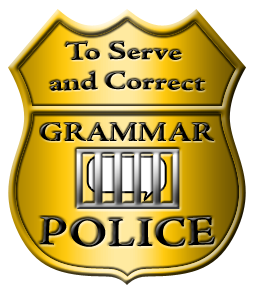 OHHH!! Someone who is better at avatars than myself needs to add that to Sari's!!!

English is a stupid language by Shailender Singh

We sometimes take English for granted
But if we examine its paradoxes we find that
Quicksand takes you down slowly
Boxing rings are square
And a guinea pig is neither from Guinea nor is it a pig.

If writers write, how come fingers don't fing.
If the plural of tooth is teeth
Shouldn't the plural of phone booth be phone beeth
If the teacher taught,
Why didn't the preacher praught.

If a vegetarian eats vegetables
What the heck does a humanitarian eat!?
Why do people recite at a play
Yet play at a recital?
Park on driveways and
Drive on parkways
How can the weather be as hot as [bleep] on one day
And as cold as [bleep] on another

You have to marvel at the unique lunacy
Of a language where a house can burn up as
It burns down
And in which you fill in a form
By filling it out
And a bell is only heard once it goes!

English was invented by people, not computers
And it reflects the creativity of the human race
(Which of course isn't a race at all)

One thing that I've caught myself doing is typing in dialect. I'm from Southeastern U.S.A. (yeah go ahead and yuck it up), and I'm prone to typing the way I speak. My spoken communication is much worse than my written, but you get the idea.

I'm a journalist, and this was quite possibly the best thing I've ever read. Thank you for brightening my day.

What about using the punctuation inside the parenthetical statements?
Or using single quotes instead of double quotes? Punctuation marks inside the quote?

Take thy beak from out my heart, and take thy form from off my door!'
Quoth the raven, `Nevermore.'

That should be Sari's avatar...

Actually, it shouldn't. It's too close to the [bleep] flag to be amusing to me.

I didn't see a n a z i flag anywhere close by. Or were you meaning close in resemblance?

Why is n a z i in the word filter all of a sudden?